Shihlin - Ranked No.1 electrical manufacturer in Taiwan with more than 60 years' experience.

The company has been a leader in the domestic market with advanced technology in heavy electrical systems, electrical equipment, machinery and automation for a long time. In the overseas market, the company has also performed splendidly after cautious deployment and hard work.

Changes for the Better, Create the Future 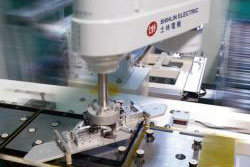 Established in 1955, SHIHLIN ELECTRIC & ENGINEERING CORPORATION has expanded its operations from basic construction to public works, from the development of electrical power resources to assisting in industry upgrade. In retrospect, the development of the company has been closely associated with the economic growth in Taiwan. The company plays a pivotal role in the domestic electrical and automation industry.

The company has established Automation Business Group in line with the development and future trend of domestic industry towards intelligence, technology and digitalization since 1984, it has continuously developed and represented well-known brands of key components for FA products. By setting up production bases and business territory (Taiwan, China, Southeast Asia, overseas emerging markets, etc.), and actively recruiting high-tech industry elites and management talents, the company dedicated to provides better products and services in helping industrial upgrading and manufacturing automation.

Ready For The Role Of World Champion

The company is ready for the challenges of the future - a magnificent vision, a blueprint for deployment, core competence strategy and the best quality human resources are all in place. Now, the company cannot wait to enter the international market and take part in global competition.

Established in 1955, with interests in research and development in manufacturing as well as marketing integration, Shihlin Electric has grow our footprint from Taiwan into Global.